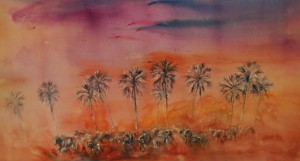 Roaming herds of buffalo wander around Southern Africa, and like all large herds of grazers, their movements are governed by supply and demand of grazing and water. These herds are not as common as they once were, unfortunately, and are mainly enclosed within the protective walls of a National Park or Reserve. One year may find them to be more numerous than others, and they often will affect the numbers of predators in the area. If there are more buffalo, then there will be more food, therefore more lion, for example. In Hwange, where the inspiration for this painting came from, huge herds can still be found, going from pan to pan in the endless search for water and grass, and more often than not, a pride or hunting pair of lion will be trailing along behind them. But, although the buffalo are usually aware of these lion, they will almost act casual, as being in a large herd offers the illusion of safety in numbers.
https://tamrynpohl.com/wp-content/uploads/2011/10/palmstampede02.07_3_1.jpg 700 1302 admin http://tamrynpohl.com/wp-content/uploads/2016/11/tamLogo.png admin2011-10-26 09:04:232011-11-07 18:10:30Palm Stampede

Cape Buffalo, Africa’s notorious bovine beast. This animal is not to be messed with! Their herds can number in the thousands, the huge bulls moving through as they like, with the females leading the pack. Speaking from personal experience, there is nothing scarier than being eye to eye with a rampaging buffalo. Having said that, I have not experienced being trampled by an elephant, although I have been charged by one. But when a buffalo charges it would very very seldom be a mock charge, whereas an elephant charge is most likely to be one. So that, to me, settles the case.