SKETCH MAPS OF NORTH KAFUE AND THE KAFUE RIVER 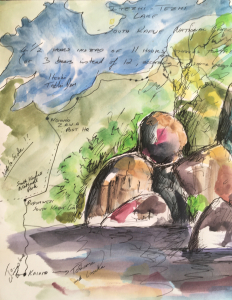 MAP OF SOUTH KAFUE FROM DUNDUMWEZI GATE TO ITEZHI-TEZHI DAM

Apparently one of the largest national parks in Africa, it comes at number 5 if you google it… it certainly feels as though you are driving halfway across the subcontinent. We are personally blessed to have this park right on our doorstep, literally about 80km north of our farm. When I was a dewy eyed shiny new bride here in Zambia 13 years ago, we were subjected to a 7 hour drive on a sandy, dusty, bumpy roads through endless but beautiful miombo woodland. Plagued by swarms of tseste flies, going to the toilet for example, was an olympic event, our large white bottoms seemed to act as a radar for them! Not to mention the pushing we had to do when we got stuck in the Kalahari sands. We didn’t see very much game either, in fact a memorable first visit when my husband-to-be was ‘selling’ Zambia to me, we saw 2 duiker I think, in the space of about 200km. Rather soul destroying! This was, of course, due to the depressing amount of poaching in the park.

However!!! On a more positive note, things are starting to change! For the better. There is a newly graded road – the Boundary road – which you can shoot along to Lake Itezhi-Tezhi at an alarming 80 to 90 km/h which will get you there in 2 hours from Dundumwezi – the entrance at the bottom of the park. Until very recently, it was still a slog to drive in the actual park, on the Nanzhila plains road or the Cordon road, the 2 other main ways to get to Itezhi-Tezhi, but Africa Parks have taken over! what a wonderful wonderful thing. They have started by grading the internal roads, which means we have access to large swathes of the park, and in theory, the game should start to regenerate as where there are tourists, there is a presence which should deter poachers to a certain extent. The national parks rangers are also able to patrol better, which they actually seem to be doing! I think the wildlife will take a while, but with a bit of hope, Africa Parks may start to restock to give it a boost.

I love Kafue, I love the trees!!! I am a huge fan of trees, and to see such a diverse system in a 145 km drive is amazing. We go though Miombo, which is brachystegia, mainly mafuti and msasa and julbernardia. Then we hit a band of mopani, glorious colours and tall cathederal like trunks. Here in the Kafue, there are also islands of massive termite mounds, giving the impression of tree islands in a sea of yellow/white grass. My absolute favourite colour grass! The soil type then changes and we are in a vlei like the Nanzhila plains, hartebeest or zebra in the distance, and a group of ground hornbills swooping across the grass tops with their massive black and white wings. Baobabs are also scattered around and about, and undamaged as well, due to the very low elephant population. There is always a positive spin on things. The same goes for the borassus palms, fully grown and healthy as they were not eaten as a salad when they were babies. Just as you think you cannot be more surprised by the diversity of fauna, suddenly you are in Zambezi Teak land! This is closer to Ngoma, which is the parks hq close to Itezhi. So the animal populations tends to increase obviously due to the protection the vicinity of this presence gives. It is not uncommon to see ellies here, under the canopy of the shady teak trees. There are places here where the trees are so large its difficult for the sun to reach the ground. We pass the excellent Ngoma airstrip, where local tourists land to come fishing, and clients fly in for a few of the lodges and hotels in the area occasionally, but generally its very quiet.

Getting to the Lake, there are rocky outcrops adorning the sides of the road as you drive over the rise to see the blue expanse of Itezhi-Tezhi. This lake is a marvel, and was a complete and utter surprise and discovery on my part, when I first visited. In my ignorance, I was oblivious to its existence, and was blown away. It seemed like a baby Kariba to me at first glance, complete with Itezhi town on the other side and high rocky banks with holiday homes and hotels on the closer side before the spillway. The lake has islands galore, some on the parks side and some outside the park. Unfortunately the fishing is not controlled and the fishing is depleted somewhat. Having said that, there are signs that it is improving, maybe due to Africa Parks again? The idea of Itezhi Tezhi, being a ‘peoples’ lake, ie fishermen are able to make their living fishing the lake, is a good one. But.. as often happens in Africa, corruption tends to change the dynamic, and there are too many people with licences, as well as the net sizes not being regulated enough. Also other illegal practices are blind sided, as in the use of hitting the water from the dugout to chase fish into nets, setting camps up on islands within the park, using nets that are too small for young fish to get through, etc etc. What should happen is that the fish should be able to breed well on the protected National parks side, to over flow into the rest of the lake, and if it was controlled, then there would be a thriving and sustained fish population. So lets all hope with our new Zambian government, as well as Africa Parks, this may have an actual chance of happening.

Driving north, from here, there is a road called the Spinal road, which will take you on the left of the lake, game is good around the lake shore and leopard, lion, elephant, buffalo, even wild dog, are spotted fairly regularly. There are great herds of elephant coming down to drink and swim daily, buffalo pass by somewhere at least once a day. Zebra ‘dot’ the plains, loving the vicinity of all this water. Puku galore as well as impala.  Birdlife is excellent here as well. And not too long ago, a pangolin was seen on a game drive by a friend. This is all compounded by the fact that the wildlife is all very calm, a sure sign that at least here the poaching is under control. We drove to North Kafue a few weeks ago, and revelled in the beautiful graded roads. Not much game again, driving up the side of the Kafue river, but the beauty of the trees and rocky outcrops, the river banks and riverine vegetation was astounding. We also were not molested by that many tsetse flies, and only partially smelt like a hospital ward, with our protective concoction of dettol and water. The stretch from Itezhi to Mapunga bush camp, which is situated in the North Kafue, 30km from the main tar Lusaka/Mongu road which runs straight through the park to get to Barotseland, and Hook bridge, took us about 5 hours. It was a real adventure and such a pleasure to explore a new part of Africa.  Mapunga which is a campsite/self catering tented accomodation bush camp on the banks of the Kafue, is primarily a fishing lodge. However, the game is prolific, and it was quite something to have hippo fighting, and sleeping in broad daylight and all night in front of your tent door! A pissed off elephant bull, or bully, sauntering through the camp to intimidate us for the hell of it sent all 8 kids and a granny into the double cab isuzu. A 15 foot croc cruising at the end of our boats at night, looking for all the world that it was an innocent log, hoping one of the kids will fall in for its breakfast. Adrenaline was the name of the game and the kids certainly got some life experiences shoved into a short 4 day trip. Fishing was amazing, beautiful big colourful fish or different species from african pike to purple thin mouths and yellow bellies, silver barbel and leopard squeakers! All sustainably released back into the river, I might add. It is such a pleasure to fish on a major African river without netting, hundreds of boats and people living along the edges. As if you are truly in deepest wild Africa. Thank goodness for National Parks! It was such fun trawling the river and seeing what was going to come out of the river next.

We went for a couple of game drives, and literally within 15 km saw leopard, very relaxed, and a lion, not so relaxed and bit scary! We saw wattled cranes and southern crowned cranes. But the highlight of our birding has to be seeing a brand new kingfisher! the Shining Blue Kingfisher! Only supposed to be in the very north of the country according to our book this beautiful blue bird, indeed shiny, slightly bigger than a malachite was spotted by my sister and I on the river bank amongst the water berry trees. What a stunning sighting! We also saw African Finfoots which was a first for my sister.

So thats Kafue! So far! I have also been up to the Busanga Plains in the very north before, which is again a completely different ecosystem. But thats a story for another day…

WHO WILL SPEAK FOR THE TREES??
Scroll to top